We’ve made it all the way to present day (approximately). I’m happy to report that there are now more horror games than ever. It’s like everybody finally realized that the horror genre is ripe for the picking when it comes to video games. So…fuck yeah!

Alright, before I get super current, I need to go back a few years for this first one. The game came out on the PS3, but I didn’t play it until just recently on the PS4.

I’m about to say something that may cause people to roll their eyes, but I don’t give a squirt. The Last of Us is as good a story, both in acting and content, as any movie I have ever seen. Never, in all my years of gaming, have I been so emotionally involved in the characters I was playing as. Joel and Ellie’s (the above mentioned characters) story is touching, chilling, tragic, loving, and everything in-between. END_OF_DOCUMENT_TOKEN_TO_BE_REPLACED

Level 5: Where we start at the depths of the ocean, move on to the farthest stars and end in…Twin Peaks???

Hi there! Welcome back to my stroll down memory lane. Last time I was a major downer, this time, high on life (and drugs!) I’m all smiles. So, like I said, the first half of the 2000’s were fairly light on the scary stuff for me, but I finally got my shit together, picked up a Xbox 360, and got my horror on!

Sometime in 2005/06 I started hearing of this next game. I had made some new friends thank to returning to school. What’s that? Oh, I was in animation. Yeah, yeah, it was pretty awesome. Huh? Did I graduate? Um, well you see…don’t judge me!!

I hadn’t really played much in the way of first person shooters (FPS) since the Doom days. That game messed me up that badly. So when a pal of mine got all excited about this little game called Bioshock, I was somewhat lukewarm. Sure, the gameplay footage looked seven shades of rad, but still, it was a FPS. END_OF_DOCUMENT_TOKEN_TO_BE_REPLACED

Level 4: Japanese people are weird and why are the Russians always up to no good?

Remember how I mentioned that 1999 was the greatest year ever? Yeah, well 2000 was a giant pile of shit. Pretty much everything good from the previous year was torn away to be replaced with cruel, mocking reminders of what I had lost. Don’t worry, you can put away the world’s smallest violin, this hasn’t devolved into a pity party. I just have to set up where my head was at in the early 00’s and why for a solid few years I had all but moved away from horror (which included horror video games).

Instead, I threw on my wizard cloak, grabbed my phaser (set to sexy!) and got my geek on. Because of this, all my time went to things like the Dragonlance books, and JRPGs (Japanese Role Playing Games for those who have a life). The real world was scary enough, I didn’t need to add to it with video games.

That said, there was one exception during this sad horror-less period in my life…

Level 3: The worst town ever!!

Boy, 1999 was a crazy year for me! I had a steady job, both the Matrix and Phantom Menace had come out (screw you guys! I like the Phantom Menace!), and I even managed to get a girlfriend (I know, that one surprised me as well). With all that great stuff going on, I was ready to declare 1999 the greatest year ever in the history of years…and then Silent Hill came out and ruined me. But before we travel to that awful little town, we need to make a pit stop first in Hong Kong.

We all like cartoons (that wasn’t a question), and we all like horror stories (I’m just assuming), so what happens when you combine them? You get Fear Effect!

A couple things right out of the gate for this one. First, it was cel-shaded. There was a run in the years following this game where cel-shading was all the rage, but this one predated that jazz. Also, unlike the Resident Evil games, which used pre-rendered backgrounds (for the movie buffs, think matte paintings, for everybody else, basically static images) this bad boy did something different, it used full-motion video on a loop. This made the environment pop in a way that was not really seen at that time (it was also responsible for making this rather short game come on 4 DISCS!!!). Things were always moving in the background. Sure, it was a little weird if you hung around long enough for the loop to repeat, but hey, it was still awesome. 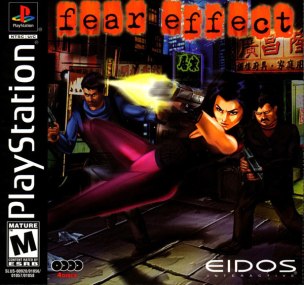 The gameplay was a mix of shooting, puzzle solving and quick-time events. You got your pick of mercenaries. A couple of grease balls named Deke and Glas, and super fox Hana. Obviously, I picked Hana. Mmm, Hana, in her tight leather pants and over-abundance of cleavage…

Huh? Oh, right, the game. A fun thing about Fear Effect was that you could literally be scared to death (hence the title). Your health bar would deplete if you ended up in bad situations. Hilariously, you could actually regain health by calming your character down (things like solving puzzles and killing baddies in an efficient manner) would bring you back to the green. END_OF_DOCUMENT_TOKEN_TO_BE_REPLACED