I had a great opportunity come my way this past December. CFTV was putting together a new show called The Write Stuff hosted by Veronique Mandal which would focus on two different writers each episode and they were looking to do a horror themed episode. Guess who got the call? My friend, and fellow horror writer, Mick Ridgewell was also invited to take part.

I was given directions to a small building located in Leamington ON, which, if you’ve been to Leamington, a metropolis it is not. So after cruising down a pitch black Highway 3, in the rain, I was convinced that the whole thing was an evil ploy to get me into the middle of nowhere and kill me. However, since I have no life insurance policy (which eliminates my wife, who, let’s face it, is the only person who probably wants me dead), and not a ton of enemies, I figured I should continue on.

Sure enough the directions turned out to be accurate and I found myself at the CFTV station. A brief introduction to the man in charge and the television crew followed and then I was in the green room (although it wasn’t actually green) and talking to show host Veronique Mandal.

Soon after Mick arrived (fashionably late), and we got down to business.

I’ve done interviews before, but they were always short things on the radio or for newspapers. This was something altogether different. I was going to be talking one-on-one with the host for nearly half of the show’s runtime.

After several mic checks, which was awkward because I was required to talk continuously about random things until they could figure it out, we began. Veronique dove into the questions (which centered on my first book, The Space Between Houses) and away we went.

I felt like I handled myself well, but was not trusting in my own gut (sizeable though it may be) and decided that I would wait until I actually saw the episode before I told anybody about it.

After my segment, I got to sit off to the side as Mick entered the hot seat. It was interesting seeing the show from that angle. The room was completely backed out except for the set and it produced a voyeuristic sensation within me (nothing sexual here, although Mick is a fine looking fellow).

Once the tapping was finished, we took a couple photos, chatted for a bit and were on our way. 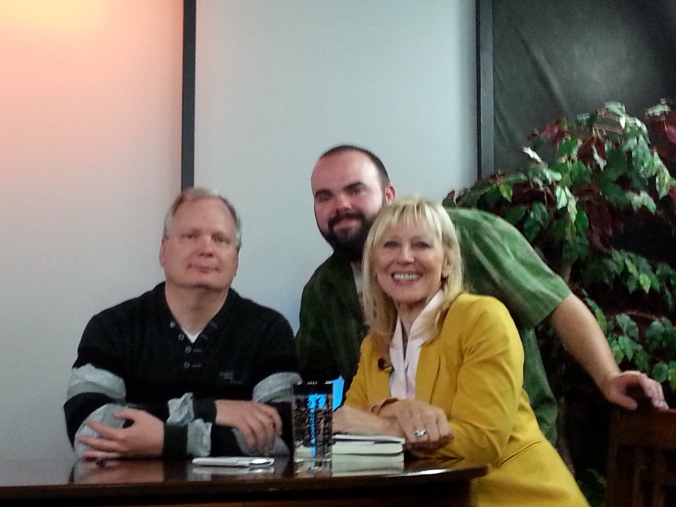 Me and mick ended up at a nearby McDonalds for a late night snack, and then returned to our regularly scheduled lives.

Flash forward to last week when the episode finally aired. The Write Stuff was broadcast across Canada…for Bell ExpressVu customers only. Since I don’t have Bell ExpressVu, I missed it. Thankfully, I was sent an email from CFTV and some handy Youtube links to boot.

I was very hesitant to actually watch it. This is because I’ve decided that not only do I sound ridiculous, I also look stupid as well (I believe I described my physical appearance in such things to my wife as, it looks like my fat face is trying to eat my features). And even though I feel this is still true, I don’t appear as awful as I feared so I chalk it up as a win.

Anyway, at the end of the day it was a great experience and I would do it again in a heartbeat. Thanks to CFTV for giving me the opportunity and hopefully I didn’t cause too big a ratings drop-off…

(The episode  has been broken in two. Mine is up first)