Level 4: Japanese people are weird and why are the Russians always up to no good?

Remember how I mentioned that 1999 was the greatest year ever? Yeah, well 2000 was a giant pile of shit. Pretty much everything good from the previous year was torn away to be replaced with cruel, mocking reminders of what I had lost. Don’t worry, you can put away the world’s smallest violin, this hasn’t devolved into a pity party. I just have to set up where my head was at in the early 00’s and why for a solid few years I had all but moved away from horror (which included horror video games).

Instead, I threw on my wizard cloak, grabbed my phaser (set to sexy!) and got my geek on. Because of this, all my time went to things like the Dragonlance books, and JRPGs (Japanese Role Playing Games for those who have a life). The real world was scary enough, I didn’t need to add to it with video games.

That said, there was one exception during this sad horror-less period in my life…

Picture Resident Evil (any of the early ones will do), now set it in feudal Japan and instead of science run amok, the creatures are the result of evil spirits, and you get the gist of Onimusha: Warlords. The game was even made by Capcom and if I remember correctly began life (during the conceptual stage) as a Resident Evil game. 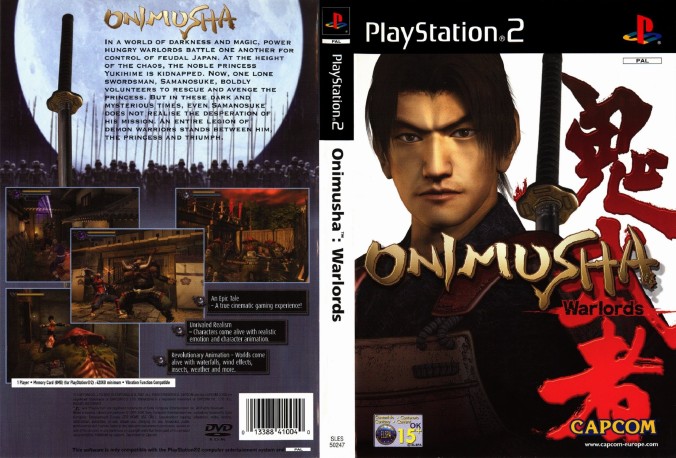 This was the first big game I was looking forward to on the new must have console, the PlayStation 2. Funny historical note regarding the PS2, there weren’t enough of them to meet demand when it launched. People went crazy trying to get their hands on one. Luckily, since I had recently suffered a nasty injury, my dear Mom went above and beyond and snatched me one on the release day (thanks Mom!)

First things first, this game was gorgeous! Although it used the same style of pre-rendered backgrounds found in Resident Evils 1 -3, it was much better. Basically think of the RE games as a crack whore, and Onimusha like a high-end escort; they’ll both have sex with you, but you can only bring one to the prom.

The combat was also really tight, and since you played as a samurai, you obviously wielded a bad ass sword. The gameplay was a hack-n-slash affair, but doing so in a survival horror setting was something new and it worked really well. You also had to collect orbs and things that came out of your vanquished foes. With these orbs you could level up your attacks and powers. Unlike other survival horror games, it was actually in your best interest to fight the monsters, instead of running past them.

The plot follows a dude named Samanosuke (yeah, it’s a mouthful) as he goes to rescue his Princess cousin from evil demons. It sounds silly but the presentation and storytelling was top notch so you believed. Plus, its Japan, shit’s just different there. When Samanosuke arrives on the scene, he realizes that he doesn’t have the power needed to deal with the baddies, but luckily for him, some nice spirits called the Oni lend a hand and give him a supernatural tune-up.

Leaving a bloody swath through Japanese mythology ended up being a thoroughly rewarding experience. By the end of the game, you are a powered up wrecking machine (this actually costs the game a point in my book. If you are maxed out, which is easy to do, you smash the final boss no problem).

Onimusha had three sequels. Onimusha 2: Samurai’s Destiny and Onimusha 3: Demon Siege (which ended the trilogy and co-stared Jean Reno! Seriously, the mother fucking Professional was in this game!!), and lastly Onimusha: Dawn of Dreams (this one kinda sucked balls and had nothing to do with the previous games).

That’s enough of the Japanese for now, let’s set our sights on the Russians.

Okay, I know what you’re saying. Either, “Cold Fear? Are you serious?” Or, much more likely, “Cold Fear? I’ve never heard of it.” I’ll start by stating this, yes, Cold Fear is a Resident Evil clone. And yes, it didn’t add anything new to the survival horror genre. But you know what? It’s my list, so too bad. I loved this game.

So what is Cold Fear about? Basically, it’s Resident Evil on a boat. I know that sounds lame, but the game was super awesome.

Maybe it’s because I’m a sucker for any horror story set either on a boat or train, or maybe the cool part of my brain was trying to break free of warp speed and wizards, but whatever the reason, I was drawn to this game. And it didn’t let me down.

You play as a US Coast Guard, Tom Hansen, who boards a Russian Whaling ship. The rest

of the Coast Guard is quickly killed leaving you alone on a boat full of nightmares.

It turns out the Russians were up to no good…because you know, Russians. They found some scary creature while drilling at an oil rig and decided to make biological weapons out of it. Surprise surprise they lose control of everything.

You end up at the above mentioned oil rig, but first you have to navigate the whaler. The ship, which is rocking violently because a fierce storm is the star of the game. Shipping crates slide around the deck. Lightning flashes reveal shambling zombies. Continuous rain makes visibility minimal.

A mad scientist, a damsel in distress and some great boss fights make this RE clone worth playing.

No sequels for this one 😦

There were other great horror games on the PS2X (that one’s for you Josh!) that are worth mentioning. First, and it’s a big one that I barely played thanks to me time off from the scary stuff, was the Fatal Frame series. I still might go back for these, especially part 2 which is considered one of the best horror games of the time. A couple others were Haunting Ground and The Suffering Games.