I can still remember the moment I fell in love with comics. I was about eight or so and had just come back from the corner store with my grandma. Since I was a spoiled child, I had gotten a comic book while there (and also since I was a fat child, probably a few chocolate 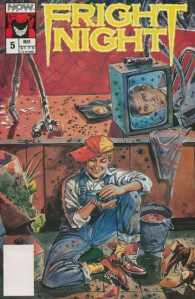 bars as well). Now, it wasn’t my first comic book (and lord knows it was very far from my last) but for some reason this one changed me. So what’s the comic you ask? It was Fright Night #5 published by Now Comics. Basically it was a comic series based off the rad 80’s vampire movie of the same name. The comic was set after the movie and it followed the main characters as they hunted various monsters. Anyway, this book was unlike anything I had ever read before in a comic, it was dark and violent and great.

After that day I was convinced that I was going to be a comic book artist. I carried that dream for the next twenty years or so. The problem with all that though was that I really hate drawing. It’s something I’ve always been pretty good at, but I’ve grown to hate doing in so much that I could never put the time in to go from pretty good to really good.

Around the same time I was discovering my un-love of drawing I was awaking to the awesomeness of writing. This led naturally to wanting to write comics. The first comic I wrote was a three issue sci-fi mini-series (a story I still really love and may turn into a prose one day). I wanted to draw the comic myself but only made it about five pages in before I remembered that drawing sucks.

Teaming up with a fellow Adventure Worlds writer, Justin, I started on another story which, wisely, I turned to somebody else for art duties. This one was and adventure story about a treasure hunter. The artist drawing it penciled most of the first issue before bailing. The silver lining in that case was that I managed to use the characters from that story for a short on Adventure Worlds found right here: http://adventureworldsblog.com/2013/07/29/kale-akana-and-the-forest-of-bones-complete/

I was let down by my comic attempts be not deterred and jumped back at it. I was developing a story which I truly believe would have gotten published. It was a fantasy western with a healthy mean streak. When looking for an artist, I hesitantly turned back to the guy who already let me down with the treasure hunter story; I really didn’t want to because of the previous experience, but knew that his style would fit the story perfectly. Flash forward a short time and…you guessed it, he bailed.

This brings me to the hardest part of making a comic book; finding somebody to draw the damn thing. I know that it’s hard to commit to something as time consuming as drawing a comic book for free, but what people don’t seem to get is, if you do it for free, you at least 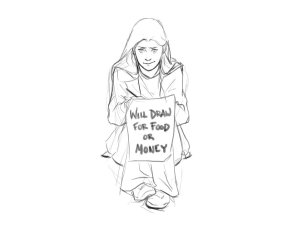 have something to show for future paid work. It is pretty rare to jump into a paid gig when you have absolutely nothing to show people. And a comic like the fantasy western had tons of potential and could have been a great launching pad for both our careers. Instead…well, yeah.

I still like writing comics, although it is far from my focus these days. That being said, there are a few comic projects in the pipeline which (fingers crossed) will see the light of day soon (including a collaborative effort with this fellow: http://benwltp.wordpress.com/ ). Even if these things do manage to come out, I still won’t be launching myself back into the world of comic creating. I’ve learned that it is a fun side project, but having to rely on others to see your work competed is damn near unbearable.

Although comic creating has fallen to the back burner—on low heat—I can confirm that I am still hopelessly in love with reading the stupid things. And in case you were wondering, yep, I still have that issue of Fright Night.